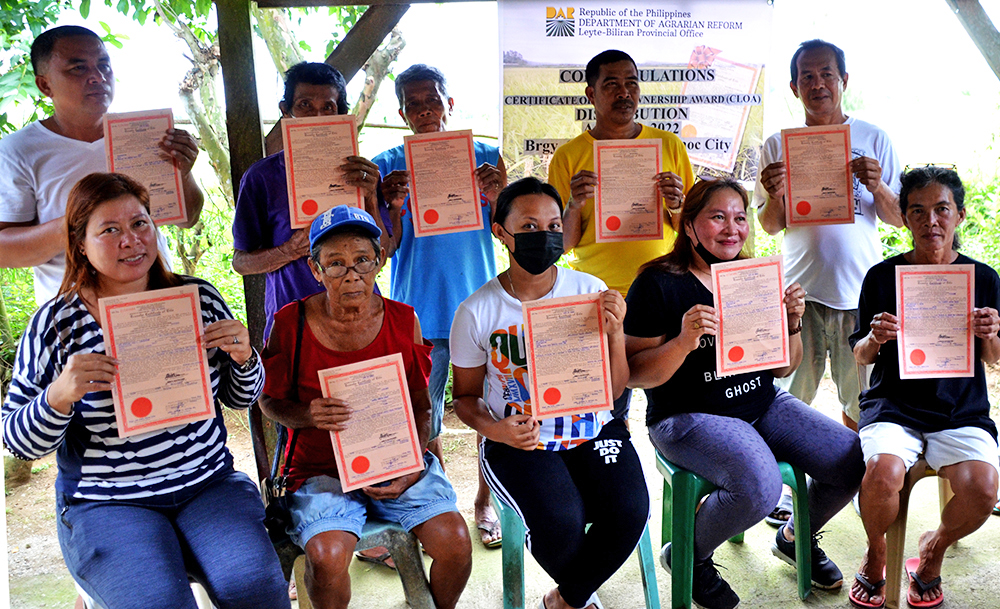 ORMOC CITY – After more than a decade of tilling their small rice fields, 10 farmers in this city finally received land titles that will prove their ownership.

The Department of Agrarian Reform (DAR) distributed the Certificate of Land Ownership Award (CLOA) to the said farmers through Municipal Agrarian Reform Program Officer (MARPO) Ruben Rebato in a simple distribution rite held in Barangay San Jose, where most of the recipients reside.

Rebato said the 10 individual CLOAs covered an aggregate area of 6.8660 hectares previously owned by the Concepcion Espina Agricultural Corporation and Anito Ygot. The landholdings are situated in the adjacent Barangay Guintigui-an in this city.

“I am grateful I received a title. Thank you, Lord, I now have my own title,” says 63-year old Ernesto Bolakinia after receiving his land title for the 0.6489-hectare rice field that he has been tilling. He said this would be of big help in sending his children to school.

Ramil Catado, a 42-year old recipient, happily received his CLOA for a 1.0255-hectare piece of land, as he will now be relieved of giving a share of the harvest to the former landowner.

“All the harvests will now be ours,” he said, adding, “Thank you very much, we now own land where we can plant for our livelihood.”

Elenita Godin, a recipient of 1.8 hectares of land, also said that she is very much grateful because it is her first time to own a piece of land. Rebato reminded the new landowners of their obligations as agrarian reform beneficiaries (ARBs), including the diligent payment of land amortizations and the real property taxes. By Elmer Recuerdo (EV Mail August 22-28, 2022 issue)