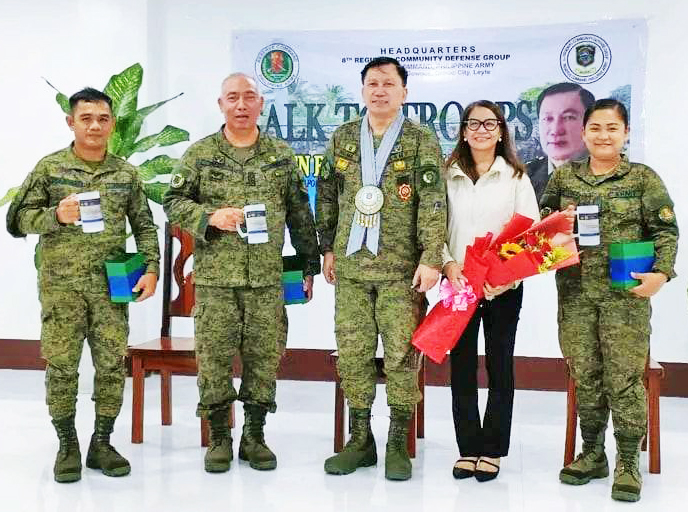 ORMOC CITY – Soon, he will be retiring but before he will keep his uniforms inside the cabinets, BGen Edgardo C. Palma first visited the different military units where he was previously assigned.

His wife, Dr. Faith Palma, joined him on this journey and witnessed first-hand the warm welcome accorded to her husband. She shared that she was also amazed of the tourism and historical places they passed by during their quick trip to Eastern Visayas.

At the 802nd Peerless Brigade COL Toto Vestuir led the troops in welcoming their guests who happened to be his classmate at the PMA Class ‘91. The visitors also left their palm prints at the brigade’s wall marked as “The Hand that Helps.”

Then he proceeded to the Home of the Citizens Army Builders in Region Eight (8th RCDG) where he was warmly welcomed by the personnel whom he led in 2011 as Group Commander.

Afterwards, a ceremonial tree-planting was conducted.

During the Executive Session, Palma recalled his time with the Matapat Troopers and remembered the memorable experiences during his stint serving the ROTC and Reservists in Eastern Visayas.

LTC Raymundo C. Picut, Deputy Commander, also appraised him of the unit’s current programs anchored on the Philippine Army Reserve Command’s key priorities, where they are said to have been applauded for their discipline and transformation efforts.

The OSSSM Chief was also grateful and personally thanked the people who have been part of his military journey that in one way or another contributed to his successful career.

“I’d like to convey my gratitude for the time you have dedicated during my exit visit and thank you for being part of my military journey,” he said. Currently, Brigadier General Palma is the Chief of the Office for Strategic Studies and Strategy Management, AFP and will retire in the next few months. By Josie Sersena (EV Mail November 7-13, 2022 issue)