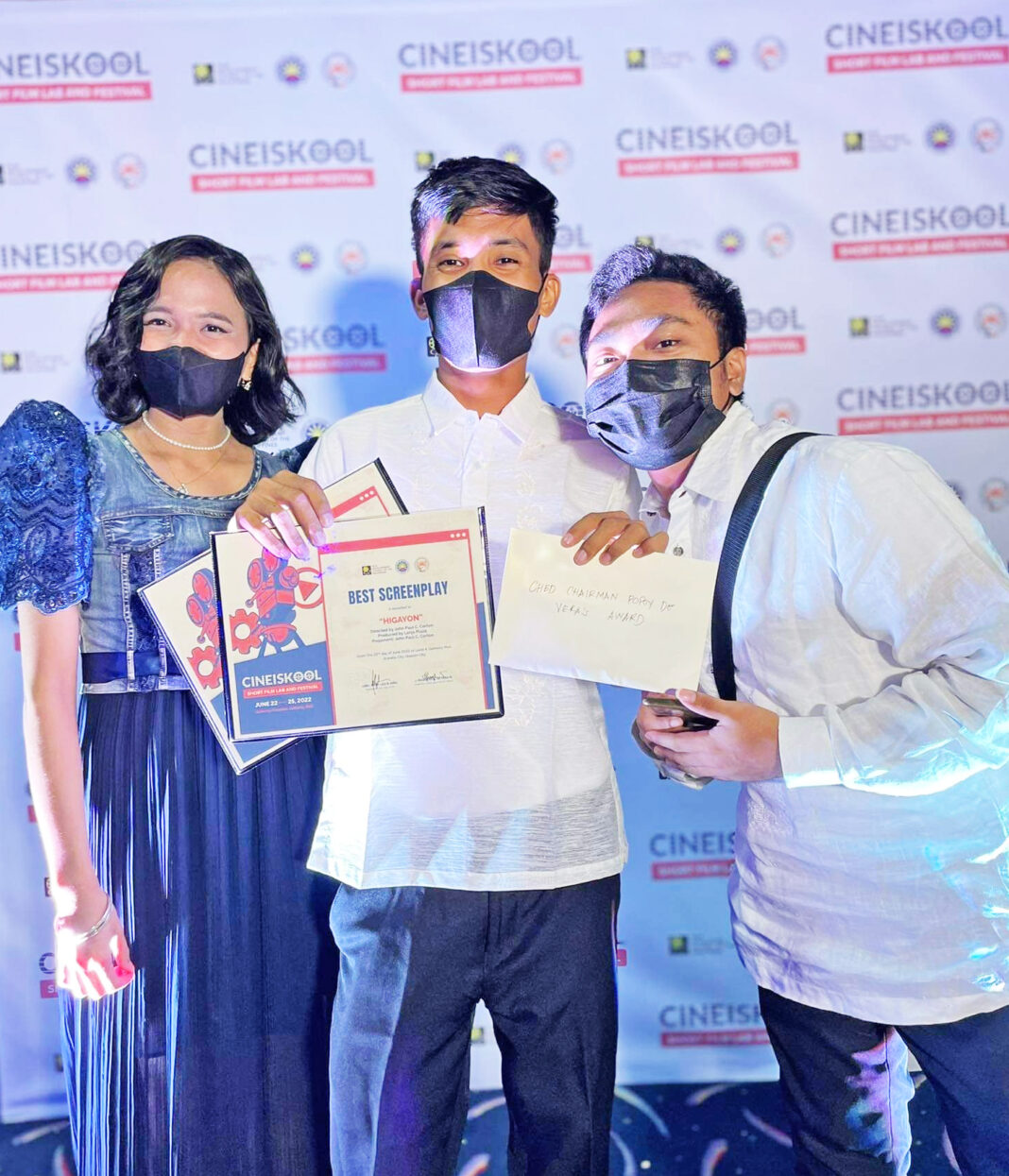 ORMOC CITY – Despite not bagging the coveted Best Director award, John Paul Corton, a Development Communication student of the Visayas State University (VSU) and a young Ormocanon filmmaker was still able to grace the big screen with the film “Higayon (Chance)”, which he directed and won for him the Best Screenplay and CHED Chairman Popoy De Vera’s Award in the recently concluded 1st CineIskool Film Festival Awarding held at Gateway Cineplex Cinema 1, Cubao, Quezon City on June 22, 2022.

The said awards came with trophies and a cash prize of Php 20,000 each.

With the recent wins on the national stage, Corton believes that this is the first step towards his dream of becoming known in the industry of filmmaking. The awards, he shared, were a confidence-booster for a growing writer like himself.

“That win really boosted my confidence especially as a writer because I won the Best Screenplay award. It is a motivation for me to improve my craft and to do well in writing,” Corton said, adding, “It is wonderful that those awards paid off all my efforts and served as a relief to all of my frustrations as a scriptwriter who once struggled to complete a story plot.”

When asked about the role of their sponsors such as the FDCP and CHED, Corton gladly expressed his thanksgiving to them as they provided them — the filmmakers — a voice to tell a story about their experiences as beneficiaries of free higher education.

“From the start, we could really feel their support. Their support was really great and they were initiative in terms of providing us film labs, excellent mentors, and the distribution of tranche. They gave us the motivation to take our passion to a different level,” he shared.

Consequently, Corton also acknowledged the huge role that the local and regional government play in supporting the interests of filmmakers. Their involvement, he said, will immensely give local filmmakers a platform to tell their stories to the community.

“The LGU has a huge significance in making this a reality. If our local government, for example, here in Ormoc, can create a community of filmmakers, it may be the start of film festivals. In fact, it is also my advocacy to build a community of local filmmakers here in the city,” he declared.

After the said film stint, Corton eyes on joining the Sine Kabataan and Cinemalaya next year to further develop his filmmaking skills and give him exposure in the industry.

Here is the list of other films and directors that won several awards during the film festival:

Best Director: Mary Franz Salazar of “A Million Worth Degree”;

Special Mention: “Liwanag” by David Mark Oray and “Jeremiah 29:11” by Jenny Mae Limama. CineIskool is a collaboration between FDCP and CHED to highlight the significance and benefits of free tertiary education in the Philippines through filmmaking. It seeks to encourage the youth to maximize this academic opportunity by the government and amplify their voices. (By Nino Piolo Roto, EV Mail July 4-10, 2022 Issue)