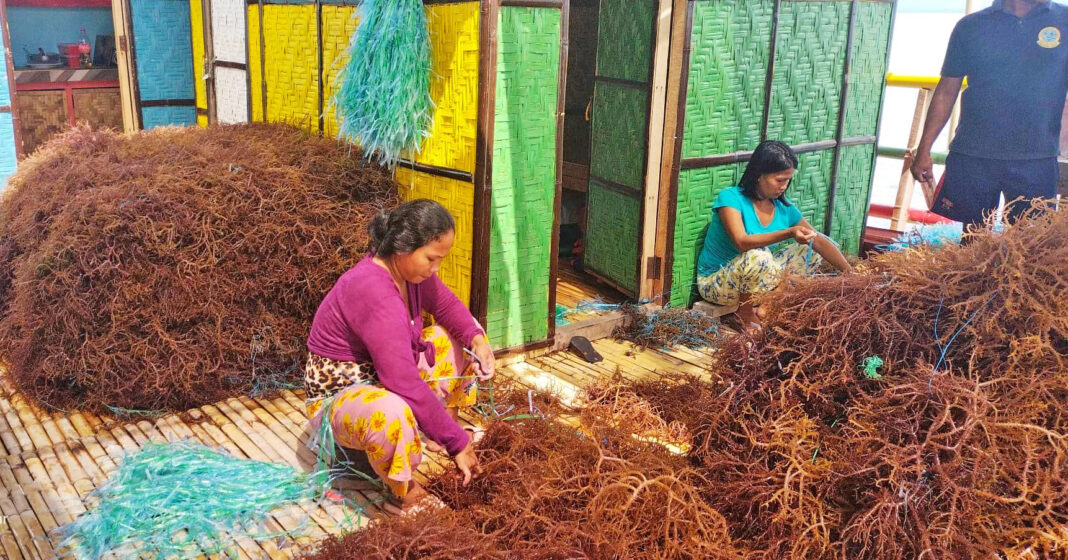 DAWAHON ISLAND, BATO, Leyte – The cuttings of the brownish seaweeds were piling up but 31-year old Marifel Gabison is undaunted as she picks them one at a time to tie them to a fiber rope of about two-meters long while she chats with five other women who are doing the same task.

Her hands are quick, the twigs are perfectly tied even without looking at them – a skill that she developed from over three years of doing the same job. She receives PHP 6.00 for every line of 100 cuttings, which she gets in cash at the end of the day. The line of cuttings is the seedling that will be planted back to the sea in the vast expanse of the town’s seaweed farm.

“Earnings are not always the same. Today I will receive more than PHP 200 for what I have completed,” she said as she took a peek into a room at her back where her four-month-old baby is peacefully sleeping.

Gabison said there is big demand for new seedlings to replenish those that were destroyed by typhoon Paeng that passed just three days earlier.

Dawahon island, which straddles between Leyte and Bohol, is the biggest seaweed producer in Eastern Visayas and accounts for 90 percent of the region’s seaweed production.

The Bureau of Fisheries and Aquatic Resources regional office says the typhoon damaged an estimated PHP 16-million worth of crops and properties in the island, the second worst disaster since typhoon Odette struck in December 2021 where total damages reached PHP 200 million.

“We haven’t even fully recovered from typhoon Odette, then we have Paeng,” laments Benjamin Tańo, the president of the 342-strong Dawahon Seaweeds Farmers Association.

“Typhoons are getting more destructive now,” he says. “During typhoon Odette all our seaweed farms were washed out and houses blown away. We were able to replant after five months by gathering those that were washed to the deeper part of the sea as our seedlings.”

Even then, Tańo said the seaweed seedlings that he gathered could cover a small portion of his 20-hectare seaweed farm. He also lost his boat that he used to access his seaweed farm, which was about half-kilometer away from the island.

For its typhoon Odette response, BFAR distributed 93 fiberglass boats with engines and complete accessories worth PHP 4.6 million and PHP 500,000 worth of propagules.

Vicenta Projimo, BFAR-8 regional civic coordinator, said one boat will be shared by three seaweed farmers while each farmer is provided with 100 kilos of seaweed propagules.

To date a total of 220 hectares out of the 1,300 hectares of potential area for farming have been planted and replanted with seaweed propagules by its 578 earnest fisherfolks, some of them have started selling their seaweeds to consolidators and buyers in Leyte and Cebu.

Ruel Inoc, a barangay councilor and spokesperson of the association, says he believes that the increasing frequency of destructive typhoons as well as the emergence of seaweed diseases such as “ice-ice” is due to global warming.

“We had strong typhoons before but they were not as destructive and more often as they are now,” Inoc said. “We also didn’t have these seaweed diseases in the past.”

Inoc added that the changing climate pattern has also reduced the number of times where they can experience a bountiful harvest.

“We used to have a good harvest all year round. In recent years, we only have good harvest during habagat from June to October,” Inoc added. During habagat season, Inco said he earns more than PHP 200,000 per month on selling green algae at PHP 40 per kilo.

With the help of BFAR-8, the association has also started adopting the use of fiber ropes in tying the propagules instead of the usual plastic straw as its own little way of making a climate change adaptation.

BFAR-8 has also advised the seaweed farmers to transfer their farms to areas farther from the shore where seawater is colder than near the shoreline. “We always remind our seaweed farmers to give importance to the interventions given by the government through the BFAR. We should not always depend on BFAR, and also continue to work hard to help ourselves,” Inoc said. By Elmer Recuerdo (EV Mail October 31-November 6, 2022 issue)